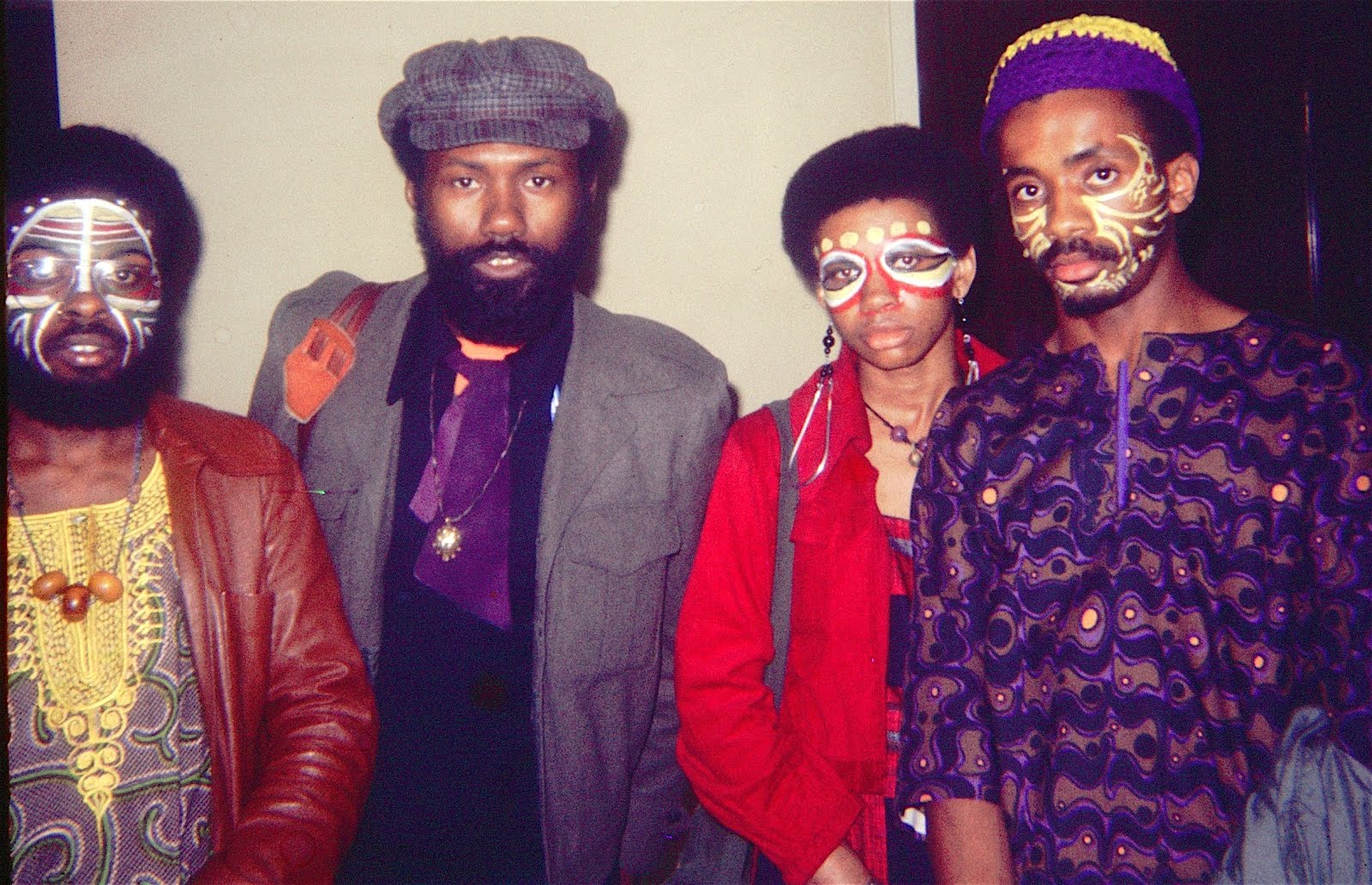 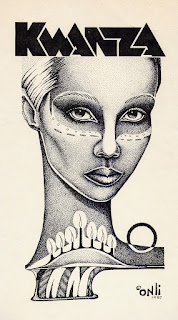 The art of Turtel Onli is African Centered. Many who have seen it appear to be confused by it. The culture conscious African Americans find it unacceptable because it does not bespeak the “traditional” Africa that they have come to know and love.  The middle-class find it difficult to accept because it is too African and not like what they have been told is “good art.  The Rhythm & Blues...... Hip-Hoppin’ Black Americans do not know about him or his work.

As I stated earlier, his work is African-Centered. He has termed his style Rhythmism.  He coined the term in 1977 and rightly so.  The paintings, wearable art, Graphic Novels. illustrations and performances he creates are alive with RHYTHM.  His work is demonstrative in its force.  The colors appear to dance before you.  The eyes, the lips, the styles of hair pull you, cajole you, take you in, 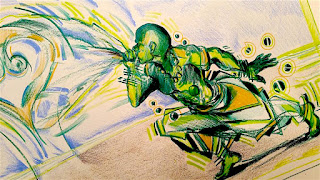 The colors are bright, vibrant, steamy as they vaporize into a thin layer of white heat and back the vibrantly charged colors.  The colors dare you to laugh, to play, to join in the high energy of life.  Life on a higher plane. Life in a new Africa, a futuristic Africa with a neo-tradition that does not deny itself but digs down into itself to bare yet a new fruit for the future.  This future fruit, a Rhythmistic one, is an universal fruit to embellish the entire fabric of humanity. 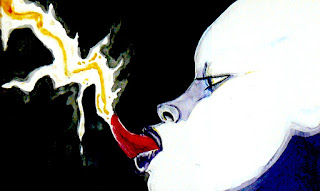 Universal is mentioned because the reference to Onli’s work being African Centered and not generally accepted in that community is due to its power and influence being misunderstood.  There is another community into which Onli has yet to be accepted and that is the White Art Community. 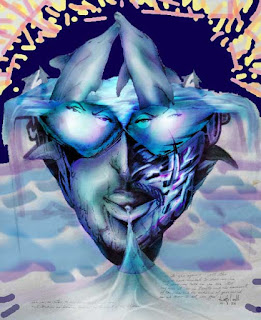 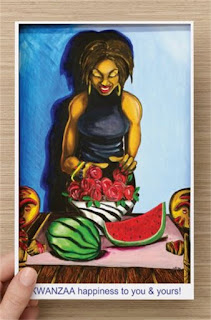 Onli is representative of a new age, a forward-thinking age. An age that has a vision of an Africanization of the future by an Africa that is viable in the world scheme of things.  And a world unified by its universal values.

The disparities between Blacks and Whites and specifically between White and Black males stumbles blindly over into the Art World.  The continuance of this practice inhibits the flow of contributions by Black artists, creating voids of sterility.  This disparity curtails the universals that we as a culture look for in the world of innovative artists like Onli.

The works of artists like Turtel Onli must be reviewed because their universals will rhythmically pull at the ancestral memories that continue to make us human.  We can no longer afford the limitations of Euro-Centric Art as the only contemporary modernistic approach to unleash the potential power of Art.  Onli and his Rhythmistic movement give the art critics, patrons, and makers the opportunity to expand their concept of the universal. 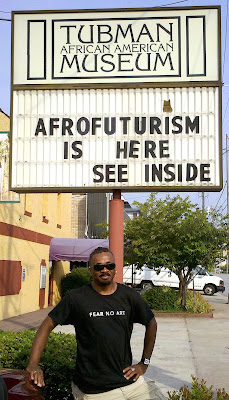 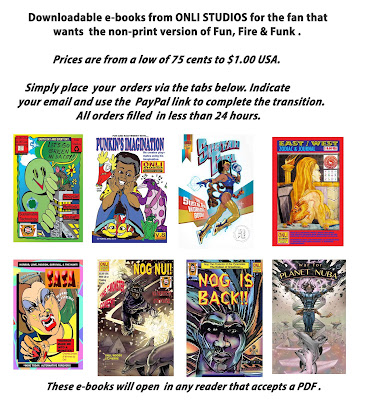 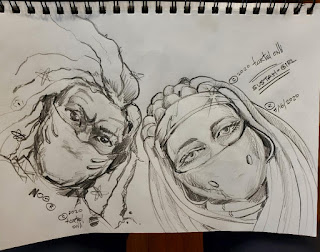 Rhythmistic Heroes masked up for your wellness efforts.
Putting a healthier future in your "Afro"! 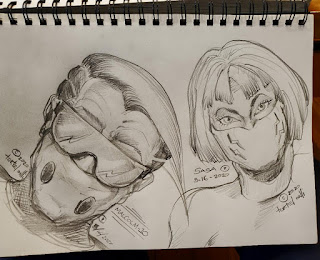 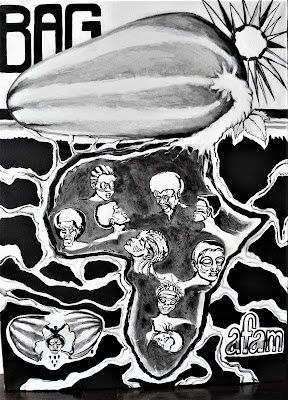 Per our Sheltering In Place Corona-Virus transitions I decided to share via this post my four recent B.A.G. tribute paintings. Each is 30"W X 40"H. acrylics on canvas or linen. 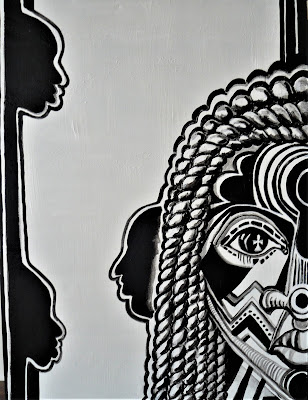 The first one is a redo of a poster designed by Dalton Brown for a B.A.G. group exhibition in 1972 at the AFAM Art Gallery that was directed by Jose Williams.

Brown's concept links the iconic watermelon via its life-giving stem, to the continent of Africa.  His treatment of the logo and slogan, "The Seeds Within" by Onli, were included along with images of B.A.G. members. 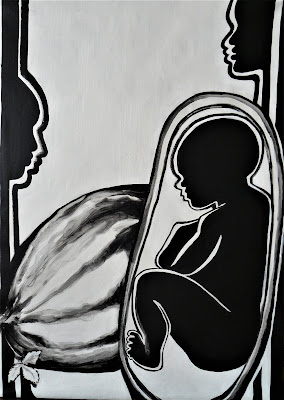 The next one is a collaboration from Smoote & Hunter that was drawn during
B.A.G.s' internship period at the One of A Kind Studio with Robert E. Paige.

The next was drafted from a logo design Hunter did for his poster design when B.A.G. exhibited at the South Side Community Art Center in the Bronzeville District of Chicago in 1972. 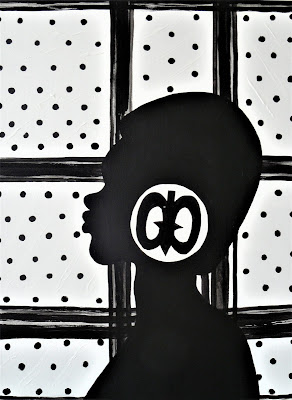 The final one is derived from a treatment designed and drawn by Greg Broils during the One of A Kind days with B.A.G., Though Broils was a professional fashion designer & tailor, he could really draw as well.

Below we see them being critiqued in a precious staging that evaluates their being true to the vintage early B.A.G. esthetic, scale and visual impact as an homage along with astutely appraising their collector's value. 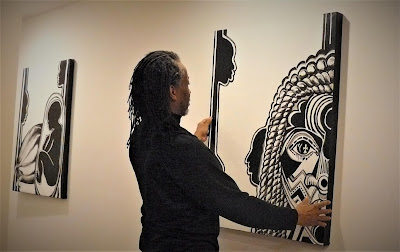 These interpreted images were derived from icons created by Greg Broils, Kenneth Hunter, Dalton Brown, Jim Smoote and Turtel Onli in the early active period of B.A.G. Circa 1970 - 1973.

Each B.A.G. member had pioneered this esthetic independently as teens in high-school, before the founding of B.A.G. by the then 18 year old Onli.  They were all pleasantly shocked during a early meeting when each shared their high-school sketch-books to discover each were already doing similar visual stylizations and treatments.

This homage is a tribute to that wonderfully fertile creative  epiphany.
Posted by Onli at 6:17 AM No comments: 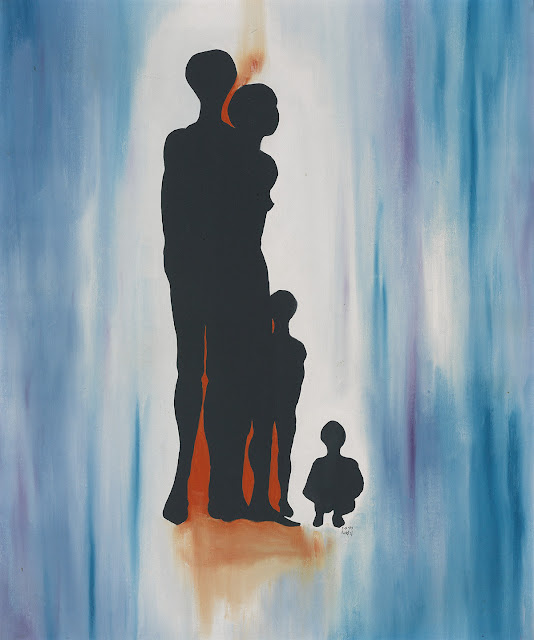 In 1970 Turtel Onli directed a tutoring program for at risk urban youth at the historic South Side Community Art Center whose Executive Director at the time was Herbert Nipson, who was also the Executive Editor of Ebony Magazine.  Nipson strongly suggested Onli submit slides to Johnson Publishing to be considered for its emerging collection of important fine art by African Americans.

At the next B.A.G. meeting Onli asked Smoote to take slides of his works and explained to Smoote the opportunity.  Ultimately this led to both of them having works included in this landmark collection of amazing fine art from the minds and talents of practicing Black Artists.

At the time Onli and Smoote were barely 20 years old. 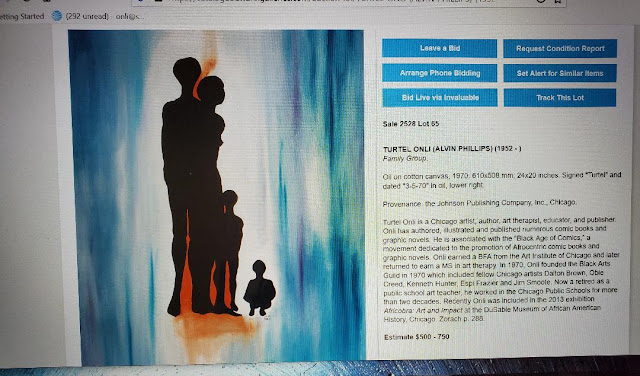 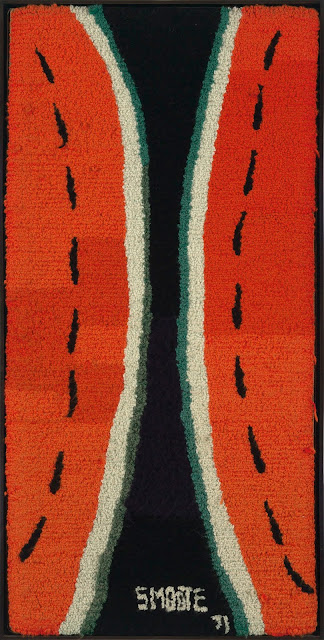 "Provenance"  This is one of Smoote's watermelon themed works that led B.A.G. to embrace the iconic watermelon as its logo and transitional object. 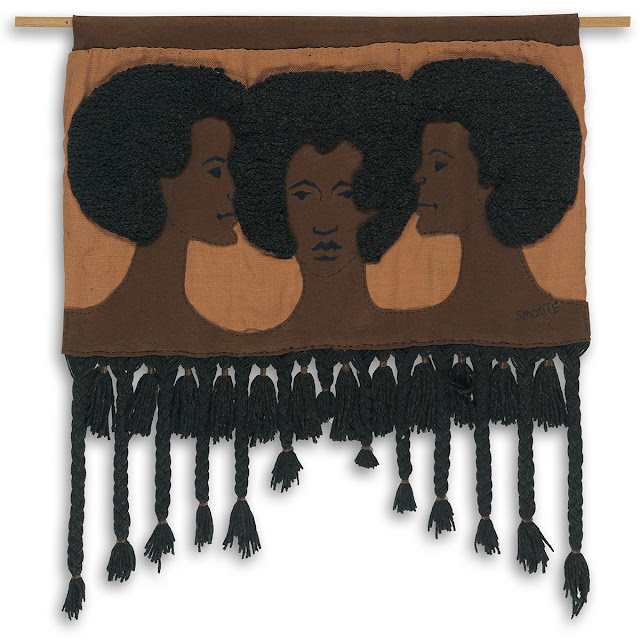 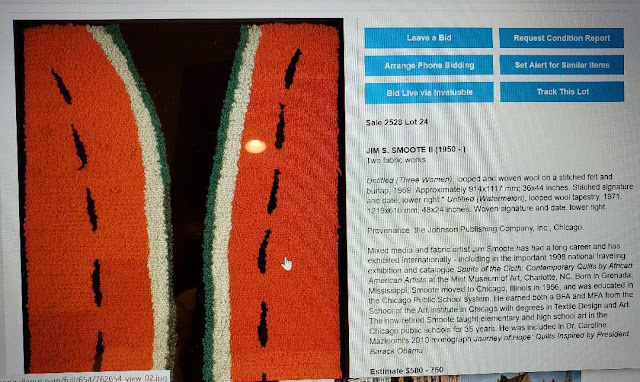 The above works of innovative fine art are included in the January 2020 Swann Galleries auction of 100 works from the fabulous Johnson Publishing Company Art Collection.
Posted by Onli at 6:54 PM No comments: 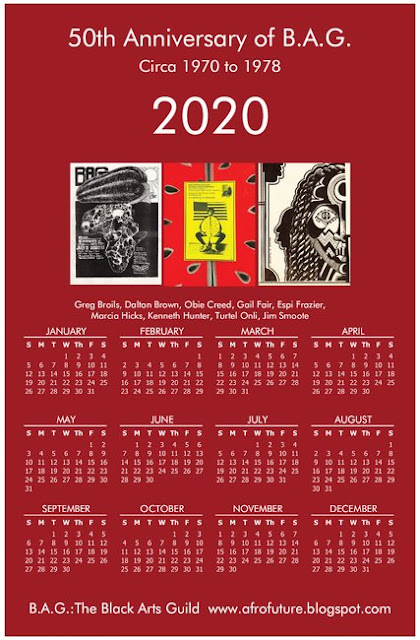 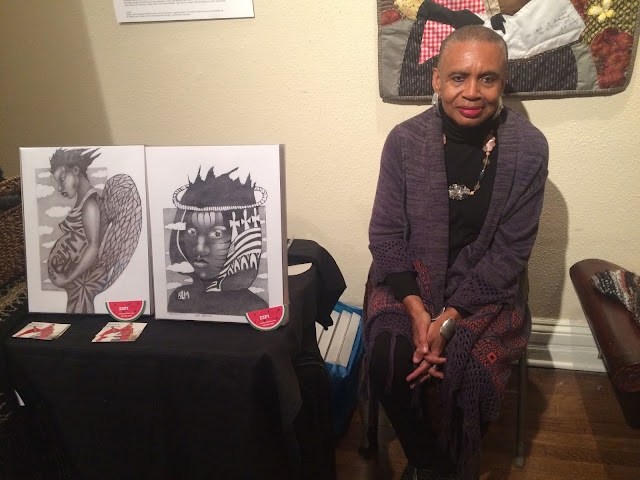 From a conversation with Espi Frazier:

“It’s wonderful to be around other artists because they give you ideas that you wouldn’t ever think of,” Frazier says.

Another source of artist inspiration came during her time as a member of the Black Arts Guild (BAG) in Chicago. The Guild, founded by Turtel Onli in 1970, will celebrate a major anniversary next year. Frazier recalls that the Guild’s first studio space was located next to the iconic Operation PUSH! headquarters by Hyde Park, and offered an inspirational environment to work in.

An important artistic element that Frazier carries with her from her early years with BAG, is the recurring use of watermelon in her work. The watermelon is a tribute to the BAG logo, as the group sought to redefine a negative stereotype. It is red, black, and green— the symbolic colors of the Black Liberation movement— and the seeds within “continue life,” she adds. “People of African descent have to decide for themselves who they are.” The watermelon motif can be found in most of her solo works.

For the entire article use the LINK.
Posted by Onli at 5:10 AM No comments:

Onli
Copyright Turtel Onli 2020 & other dates per all original images posted here. Please do not reproduce for commercial or professional use without written permission from Turtel Onli: Rhythmism lives!: Creativity, Culture & Commerce. &quot Beyond being a professor of Art Appreciation & Drawing at Harold Washington College, my independent creative practices are my focus." ONLI STUDIOS publishes indie Graphic Novels, creates Rhythmistic Fine Art, and has produced over 20 annual indie comic-cons. While working as an producer he graduated from the School of the Art Institute of Chicago in Art Ed & Art Therapy plus he worked and lived in Paris France. In addition to working on album covers for George Clinton / P-Funk & Captain Sky & others Onli created an album cover for the Rolling Stones under the direction of Mick Jagger and Keith Richards that did not pass the censorship laws in that era. Onli worked in the French Bande Dessinee field at that time. His clients included Playboy Magazine, ,Holt, Rinehart & Winston, WGN, Mode Avant Garde and the Paris Metro Magazine. ."